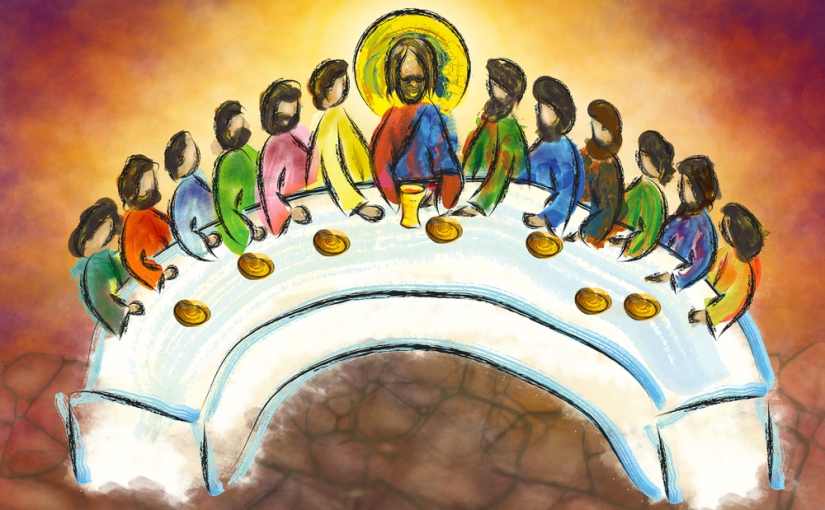 Did you know that tonight you are part of a revolution? It might not seem like it. Maundy Thursday has become a rather quiet part of Holy Week. It doesn’t have the festivity of Palm Sunday, the drama of Good Friday, or the exuberance of Easter. But, in light of current events in the world, consider this blurb from a book called The Holy Thursday Revolution. It came out in 2005, but seems even more relevant today:

How can the world evolve from a culture of war and domination to one of friendship and communion? Philosopher Beatrice Bruteau shows how the two teaching events of Holy Thursday: the Footwashing and the Supper incited the Christian revolution with the power to repeat itself on every scale of social organization–even now.

Wow! The power to repeat itself on every scale of social organization. Imagine if we really claimed that power. And by power, I don’t mean domination, but the power of friendship and communion.

I would add servanthood, since the foot washing that Jesus did was the epitome of humble service. But tonight I want to stick with the image of the table – and the meal. When you read the gospels, you can’t help noticing that there were a lot of meals. In fact, it’s been suggested that Jesus’ primary work was organizing suppers as a way to embody the kin-dom of God. And Jesus welcomed everybody: no one was denied a place at the table – which was very problematical for his critics.

In the Church, though, we haven’t always been so hospitable. I don’t know how it was here in the past, but in my experience, up until not very long ago, there were rules about access to the Communion table. Something like: “all those who are baptized and who believe in the real presence of Christ in the bread and wine are welcome to receive Communion.” That rule is still in effect in many places, and in addition you must be a member of that particular church body.

But in many churches the rules began to relax and the invitation in bulletins read simply: “all those who are baptized are welcome to receive Communion.” Even that barrier, though, began to fall. Once, in a church I previously served, a new family began attending worship services. The son had been coming to our summer day camp and he brought Mom and Dad to church. Mom and Dad were an interracial couple and they told me that they had felt unwelcome at their previous church. That church was one that did not baptize infants, and none of the three were baptized. One Sunday, at Communion time (picture a fairly good-sized sanctuary and a fairly small congregation), almost everyone was up and either going to or returning from the altar – except for this family. They sat all alone in one of the back pews and it was pretty clear – at least to me – that it was wrong to exclude them from the Table. So the next week, I invited them to come up for Communion. In my mind, I was thinking, “Please don’t anyone tell the bishop.”

Fast forward to the ELCA Churchwide Assembly that September, where presented for approval was a document called “The Use of the Means of Grace: A Statement on the Practice of Word and Sacrament.” One section in it knocked down another barrier: the participation of children. As one pastor said, “Children know they are being excluded. One thing small children, and even infants, understand is that when family gathers around the table, with the understanding that Holy Communion is God’s family meal for God’s people, they know they are not being fed. Why are mommy and daddy being fed and am I not?” A lay woman said, “If you tell a child, ‘Jesus feeds the hungry,’ then you will have children put out their hands.  They, too, want to experience the presence of God.”

But then, then . . . Gordon Lathrop, professor of liturgy at the Lutheran Theological Seminary at Philadelphia, author of many books, and the authority on all things worship-related was speaking. I confess I was only half listening, but then I thought I heard him say that sometimes it was OK to give Communion to a non-baptized person. Later that day, I saw him in the hallway of the convention center. I ran up to him – I had never met the guy, and I was a little (OK, a lot) intimidated by him, and said, “Excuse me.” He stopped and looked like he might not bite my head off. “Did I hear you say that sometimes it’s OK to give Communion to a non-baptized person?” He said, “Yes, sometimes the way to the font is through the altar.”

Whoa! Gordon Lathrop said (in much more professorial language than mine) that I wasn’t a heretic. This was a game-changer. Barriers were falling all over the place. Indeed, we are part of a revolution.

But the movement to include all people at the welcome table must continue. There are so many people who do not feel welcome, wanted, included, or even safe in our churches – even those who genuinely proclaim, “All are welcome.” Churches of all kinds are realizing that we have to learn how to be truly inclusive. It’s not enough to make the statement. We have to do the swork.

That’s why I’m thinking that the time has come for Good Shepherd to begin to look at the process for becoming a Reconciling in Christ congregation. If you’re unfamiliar with Reconciling in Christ (RIC), they’ve been around since 1983, helping faith communities to see, name, celebrate, and advocate for people of all sexual orientations, gender identities, and gender expressions in the Lutheran church. And I’m happy to see that now their purpose statement adds: “to work for racial equity and commit to anti-racist work.”

So, I am inviting you to the Holy Thursday Revolution, that is, to a movement to make our welcome table even more inviting, meaningful, life-changing, Christ-bringing to more people. You may think this is a strange way to commemorate Holy Thursday. But I can’t help thinking that Jesus, who included everyone at his table – even at that last supper, the doubter and the betrayer – would approve.

So if you want to help make Good Shepherd even more welcoming that it already is, in an explicit public way, I invite you to join me. If Beatrice Bruteau is right, the events of Holy Thursday incited – and can still insight – the Christian revolution with the power to repeat itself on every scale of social organization. In other words, we can be the Church as it’s meant to be – transformational both in our personal lives and in the healing of our broken world.