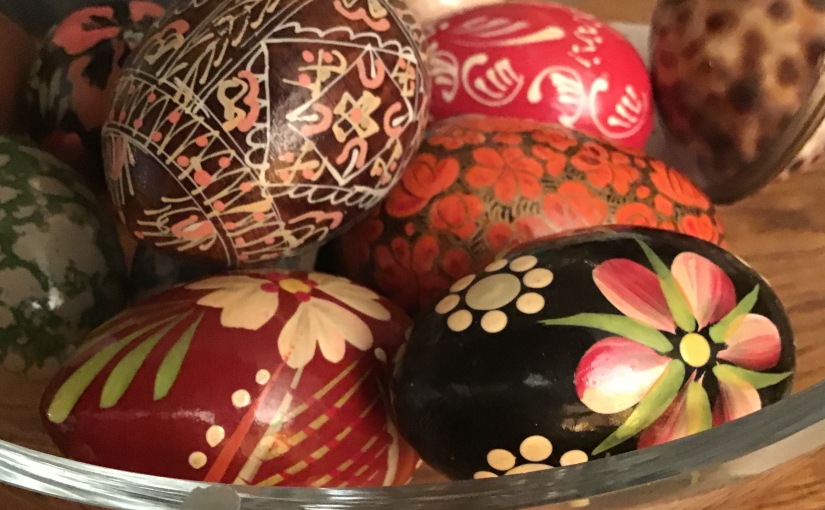 On Easter Sunday, it’s become my tradition to read two of the four gospel accounts of the Resurrection: the original short-form version from Mark (ending at 15:8) and one of the other three gospels. This year that will be Luke. I ‘stole’ this idea from Bruce Epperly, author of The Adventurous Lectionary blog, where he says:

The gospel accounts present two different perspectives on the resurrection,
and they need not be harmonized, without glossing over their differences, much as we as we often do with the Christmas stories. In contrast to the approach of many Christians today, the early church was comfortable with diverse witnesses to Jesus’ birth and resurrection. The differing stories are not stumbling blocks to faith or veracity, but reminders that resurrection is ultimately indescribable.

And now – my Easter sermon:

This is part of my egg collection. Many of these are pysanky from the Broadway Market in Buffalo, from the years I lived there. Pysanky are the Polish/Ukrainian painted eggs – like the ones Katerina made for today’s fundraiser for Ukrainian refugees.

The Broadway Market was started in 1888 by Eastern European immigrants wanting to preserve their traditions and heritage. Every year before Easter I would make a pilgrimage to buy another egg for my collection. I haven’t gotten one for many years now, so am delighted to have this special one from one of our Confirmation student’s service project.

So, although Easter is next week for Eastern Orthodox Christians, I couldn’t help thinking about Ukraine as I prepared for our Easter celebration today.  And I wondered: how do can we celebrate the resurrection in the midst of war?

Don’t get me wrong; I don’t intend my question to be a downer. Today is a day of celebration. But frankly there are so many things going on in our world right now that mitigate against believing that resurrection could have anything to do with us beyond a day 2000+ years ago when something happened.

And we don’t really know what that something was. The gospels aren’t much help; they each have a different version of what happened. Author Barbara Brown Taylor has noted that “the resurrection is the one and only event in Jesus’ life that was entirely between him and God.” So we just do not know.

Maybe it’s better that way. Years ago, when I saw the Passion Play in Oberammergau, Germany, I was unimpressed with the portrayal of the first Easter morning. What I remember was a lot of flashing lights and people raising their arms and exclaiming, but there was nothing about Jesus that you could see – obviously.

In the ‘Living by the Word’ column in this week’s “Christian Century,” Katherine Willis Pershey described her experience:
I once watched a video marketed to churches for use in Easter worship. A man wrapped in linens lay on a table. As an orchestra played dramatically in the background, the man slowly began to stir. The music billowed to a climax as the man sat up. I hated it. It reduced a miracle to a cartoon, a holy mystery to a crude farce.

But even if the gospel stories don’t give us consistent details about just what was happening to Jesus , they are informative in what was going on with other people.
The women are grieving; they are coming to the tomb with spices to anoint the body. They are anxious, not knowing how they would roll the heavy stone away. Then, after their encounter with the young man (in Mark) and the two (in Luke), they are frightened, bewildered, trembling, terrified.

And what of the men? In Mark, the women don’t say anything to anyone because they’re so afraid. In Luke, the women do go and tell the others, but the men choose to disbelieve their news as idle tales (obviously, this is pre-“believe women” ). Peter looks into the tomb, sees the discarded grave clothes – and leaves. Luke says he was amazed – but at what?

We love Mary Magdalene recognizing Jesus in the garden, but just one of the stories.

Frankly, today I’m strangely comforted by the ones who are bewildered, doubting, if not disbelieving (we’ll get to Thomas next week), and amazed – but at what?

With news from Ukraine with horror upon horror, political mayhem, Dr. Fauci reporting we’ll never reach herd immunity, news of a friend’s recurring cancer, and you can add your heartaches to the list – we feel frightened, bewildered, trembling, and terrified.

I had a friend in seminary whose mother died just before Easter in our senior year. I experienced her as a woman of deep faith. But on that Easter Sunday, she just could not feel it. She did not want to participate in the joy of the day. I have always remembered that incident – and the realization that just because it’s Easter Sunday, the grief we carry does not instantly disappear. And in the midst of the woes of today’s world, I found the entire Holy Week experience to be necessary.

On Maundy Thursday, we remembered the inclusivity of the Table, Jesus’ welcome, hospitality, and servanthood towards all people. And on Good Friday, we named and prayed for the woes of the world and remembered that God is with us in suffering. I even kept one of my eggs when it broke. Somehow it reminds me of the presence of God even in brokenness of the world.

We didn’t meet on Holy Saturday, but that day has always been meaningful to me. Even though I’m immersed in Easter bulletin and sermon, I recognize the importance of sitting in the darkness of the tomb – in that liminal space between death and life, between an ending and a new beginning. And I recall the wisdom of Sikh speaker and activist, Valerie Kaur (see her brilliant TED talk here):

This is Resurrection hope – and it’s obviously even bigger than Christianity. So if today is going to be more than just a remembrance of what happened about 2000+ years ago, we need to embrace Revolutionary Love and relentless optimism. And this is her prayer:

In the name of the Divine within us and around us, we find everlasting optimism.
Within your will, may there be grace for all of humanity.

The new thing about to be born, the end of war, the solution to the problem – might not be today. You don’t even have to be happy today. The power of God to bring life out of death, peace out of war, hope out of despair – isn’t dependent on our acceptance of doctrines, dogmas, a specific version of the Bible, or a church holy day. It just is. It’s just how God works (or Spirit, Divine, Love with a capital L).

So I can enjoy my pysanky eggs and celebrate Ukrainian culture, even while I lament and pray for the people of Ukraine today. We can lament all the death-dealing things of our world today. Easter doesn’t demand that we shut our eyes to reality. It does ask us to consider that there is something bigger, something better than us.

Back in seminary, I had a professor who was known to be very difficult. It was rumored that he asked only one question on the final exam: “Who is God?”
The answer he wanted was: “the one who raised Jesus from the dead”.

I would now add “however that happened.” Because into my story, and into your story, and into our world’s stories of suffering and sorrow – we bring that Revolutionary Love and relentless optimism – that the one who raised Jesus will also raise me, you, our world into new life – however it will happen and whatever it will mean. That door is always open. Easter Sunday asks us simply to walk through.

When the Sabbath was over, Mary of Magdala, Mary the mother of James, and Salome bought perfumed oils so that they could anoint Jesus. Very early, just after sunrise on the first day of the week, they came to the tomb.
They were saying to one another, “Who will roll back the stone for us from the entrance to the tomb?” When they looked, they found that the huge stone had been rolled back. On entering the tomb, they saw a young man sitting at the right, dressed in a white robe. They were very frightened, but he reassured them: “Do not be amazed! You are looking for Jesus of Nazareth, the one who was crucified. He has risen; he is not here. See the place where they laid him. Now go and tell the disciples and Peter, ‘Jesus is going ahead of you to Galilee, where you will see him just as he told you.’”
They made their way out and fled from the tomb bewildered and trembling; but they said nothing to anyone, because they were so afraid.

On the first day of the week, at the first sign of dawn, the women came to the tomb bringing the spices they had prepared. They found the stone rolled back from the tomb, but when they entered the tomb, they did not find the body of Jesus. While they were still at a loss over what to think of this, two figures in dazzling garments stood beside them. Terrified, the women bowed to the ground. The two said to them, “Why do you look for the living among the dead? Jesus is not here but has risen. Remember what Jesus said to you while still in Galilee, that he must be delivered into the hands of sinners and be crucified, and on the third day would rise again.” With this reminder, the words of Jesus came back to them. When they had returned from the tomb, they told all these things to the Eleven and the others. The women were Mary of Magdala, Joanna, and Mary the mother of James. The other women with them also told the apostles, but the story seemed to them an idle tale and they refused to believe them. Peter, however, got up and ran to the tomb. He stooped down, and looking in, saw nothing but the linen cloths. So he went away, full of amazement at what had happened.

I've been the pastor of Good Shepherd Lutheran Church in Burlingame, CA since February, 2020. I am a “proud member of the religious left” and an unapologetic progressive Christian. While I have been criticized by some as no longer being Christian and as a pastor for whom “anything goes,” I firmly reject those characterizations. I am most assuredly a follower of Jesus of Nazareth, as well as a seeker of the Cosmic Christ.  My preaching, teaching and worship leadership is based on sound theology and careful study. I would call myself a devotee of process theology with a Lutheran flavor. For two years I also served as the interim executive director of the Interfaith Center at the Presidio in San Francisco (http://interfaith-presidio.org) and served on the board for many years before that.  In 2005 I received my Doctorate in Ministry from the Pacific School of Religion in Berkeley in interfaith relationships. My book is The INTRAfaith Conversation: How Do Christians Talk Among Ourselves About INTERfaith Matters? I enjoy leading workshops and retreats on interfaith matters, as well as teaching seminarians how to think about pastoring in a multi-faith environment. I suppose I’m not everyone’s idea of the perfect Christian. But if you’re interested in exploring the questions of faith in the 21st century, drop me a line. View all posts by smstrouse